We probably all have a favourite character: Whether Winnie himself, or Piglet, Tigger…

Everything is meaningless.” Both Eeyore and the writer of Eccles describe what happens when whatever we allow to drive us stops, and we lose life-motivation!

What drives you? For many it’s the need for productivity and recognition: the more we produce and are recognized for, the more motivated we feel we are and the more meaningful we believe our lives to be! But, it seems to me that if we have ‘working hard in order to produce stuff and gain popularity’ as our primary motivation, well, that’s like drinking saltwater – because however much we may produce or however much reward we may receive, it will never be enough and will ultimately be exposed as MEANINGLESS!

I think of visiting old Mr Anderson (not real name) who was sitting, pathetically among all his trophies, in his wheelchair, a double amputee, and quite alone, despite his brow-beaten wife and two estranged and very absent daughters…

And so what would you say in your life is NOT meaningless?

We’re not sure when the book of Ecclesiastes was written – different scholars guess by looking at textual features anywhere from the 10th C BC to the 4th …which makes the timing almost irrelevant! That’s supported by how it makes no particular mention of God as ‘YHWH’ – the God of Israel, only as Elohim – the ‘true’ God, implying ‘God’ in a more general sense… Also, with just one exception in 1:12 there’s no reference to Israel, or even the Law. All of which makes scholars believe that – as part of the scriptures that fall into the genre of ‘wisdom’, part of what the writer sees as plainly observable for all of humanity – whether faithful or not! IT STANDS ALONE

And so what is its point? We see the writer describing a life lived as fully as it could possibly be in terms of pleasure-seeking, relationships, wealth, hedonistic pleasure…

He tried everything he writes! Some believe that this is Solomon and all his impossible wealth… And ultimately, he says, it was all just quite meaningless! Vanity! Vanity! All is vanity!!!

As OT scholar Michael Eaton[i] writes about the point of the book of Ecclesiastes: ‘It defends the life of faith in a generous God by pointing to the grimness of the alternative’

For much of the time it leaves God out… Instead,  explores the barrenness of life (lived) without a practical faith in God’

The pessimism expressed is relatable and very very real – even today! But intermingled with its pessimism are invitations to a life lived with different outlook altogether.

The writer of Ecclesiastes sets the limit of all human resources. There are warnings here for us to guard against any form of (human) self-reliance. Instead, our worshipful awareness of the holiness of God everywhere and in all things is presented as the only true beginning of joy, any meaningful sense of contentment, and from where we are most appropriately to draw all our energy and ultimate purpose in life! EVERYTHING ELSE it says IS ULTIMATELY QUITE MEANINGLESS!

The intention is to shock us! It delivers us from the kind of rosy-coloured, self-confident, yet quite godless life that we all so easily tend to gravitate towards – you know – with all of its inevitable cynicism and bitterness, …the kind of life that looks for ultimate purpose & meaning by trusting only in our own personal wisdom, or in pleasurable experiences, or the gathering of wealth, …or even human justice or integrity. None of that is EVER a good idea because – as we know – however enjoyable or rational all of those may seem, they DO all ultimately fail, exposed to have limitations, leaving us like Eeyore, old Mr Anderson, and the writer of this book, empty. While it may seem to be pessimistic, the message of Ecclesiastes is actually NOT SO! It ends with a note of affirmation – affirmations that come hammered out after this long process of being very real – having wrestled with the hard questions we all face in life!

What we are left with, then, is the awesome sense that God is here, and that God is good and generous, and it’s only as we come to embrace that, that life becomes coherent and fulfilling and has any significant sense of meaning. And so, I end by asking again: what would you say in your life is NOT meaningless? What does in fact actually matter most deeply to you? And – as a person of at least some faith – where do you see Christ in all that? How has Christ made/ is Christ making that happen for you? 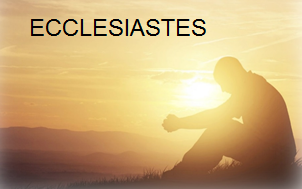 Rev. Robin Jacobson reserves all rights © 2019.
You are welcome to use, copy, edit or reproduce this sermon summary with copyright attached. Publication is prohibited.

[i] Michael Eaton (1983:44-48) Tyndale, Intervarsity Press. I paraphrase a collection of his thoughts in my conclusions.